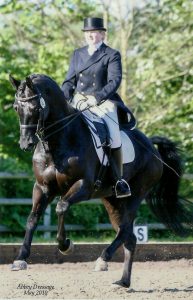 Melanie Phillips, nee Slater, grew up with ponies. From a young age she was competing in most disciplines and representing the South Hereford and Ross Harriers branch of the pony club at dressage, showjumping and eventing. She competed to Foxhunter level showjumping and BE novice events. At 16 she attended Talland School of Equitation and after two years had qualified as a B.H.S. Intermediate instructor.

After qualifying Melanie worked in Portugal, Germany and America. Focusing on Dressage Melanie worked with some inspirational trainers such as Luis Cabral in Portugal, Dolf Keller and Ralf Isselhorst in Germany and George Williams and Karl Mikolka in America. Melanie also trained with Carl Hester for many years and is currently helped by Serena Pincus.

On returning to England Melanie,  with her mother and Father,  set up Ruxton Horses in 2000. Ruxton Horses breeds and produces young sports horses. They have produced many lovely horses that have achieved competitive success. Most notably Super Nova II now ridden by Spencer Wilton and owned by Jen Goodman, Neville was bred by Mrs Kirby and bought as a weanling by Ruxton Horses. Melanie started him under saddle and trained him until he was six years old. 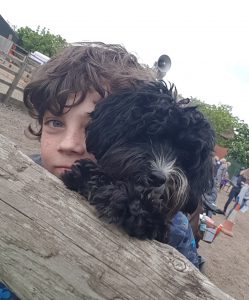 Oliver and Smudge, the Jackapoo!

Melanie is experienced in all aspects of stud management and managing young stock. She has started countless young horses and produced them as successful competition horses.

Melanie now runs her own yard breaking, schooling and competing horses for their owners.

Melanie is married to Julian Phillips, her husband of 15 years and lives on site at River View Livery Yard. They have two sons. Jack Phillips 21, from Julian’s previous marriage and Oliver Phillips 14.

We use cookies to ensure that we give you the best experience on our website. If you continue to use this site we will assume that you are happy with it.OkRead more